IT CAN HAPPEN TO YOU

Last night I had a distinct honor of co-hosting an intimate gathering in St. Louis to raise awareness of the work and mission of the Midwest Innocence Project. Based in Kansas City and supporting a five-state region (MO, IA, NE, KS and AR), the MIP has their work cut out for them.

Our system has a 5% failure rate. We know this. If you tease that out over those five states that’s about 5,000 innocent people sitting in jails and prisons convicted of crimes they didn’t commit. 5,000 people with families and friends and colleagues. 5,000 lives shattered or forever altered for reasons ranging prosecutorial misconduct to false identification and a plethora of horrible realities in between. If you tease it out over the 2.3 million who sit in jails and prisons across the United States, we are talking about 115,000 lives. The amount of years lost – or more accurately, stolen – is incalculable.

The cause of innocence was my “entree” into this world of justice reform. In a sick but very real way – it was our rite of passage. In 2007 after my mom left for Bryan, Texas to start her four-year sentence for a crime she did not commit, I called the Midwest Innocence Project in my desperation for answers and guidance. I was told at that time that, unfortunately, our case didn’t fit the bill for cases they take on. They have very specific guidelines so that they spend their finite resources on cases that are actually provable. Shockingly, most innocence cases do not fall into that category. In a lot of ways, our case just wasn’t horrible enough on the scale of injustices that exist. And because I know those stories, I understood then and I really understand now why they just can’t take everything on.

Since I started Ava’s Grace Scholarship over eight years ago it has been humbling to see the conversation about justice reform evolve. People on different sides of the “aisle” come to this work for different reasons and agendas but people from right to left agree something needs to change. What we are doing isn’t working. In that same time frame and even more recently, we have seen an awakening when it comes to system and prosecutor accountability and the fact that OUR VOTE COUNTS when it comes to who makes our laws, who enforces our laws, and who gets to decide who does and doesn’t get charged. We have seen large numbers of new exonerations, clemencies and pardons – partly as an acknowledgement that the system can get it wrong. We are seeing Conviction Integrity Units and Prosecutorial Misconduct Commissions forming across the country. This is motivating and inspiring and it is RIGHT. 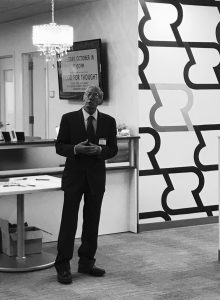 It’s an exciting time to be part of this movement. I am honored to help the MIP further their mission. But despite all this progress – which is painfully slow for those in the system – I will still never forget or get past this sentiment expressed by MIP client Rodney Lincoln in his speech last night – his first public speech since he was released by our former governor’s clemency on June 1 of this year. I heard him speak these words in front of three of his four children and I know these words to be true:

So we keep fighting.

With Gratitude and Hope for the Future,

Want to be notified when new articles are posted? Sign up below!