THE STRUGGLE IS REAL 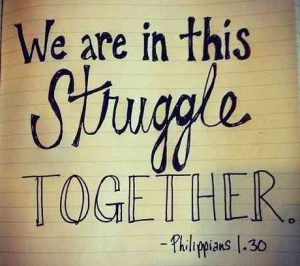 If you are part of the criminal justice reform movement you are aware that throughout the past several weeks we have seen major division and outright acrimony within our tribe. If you are watching from the sidelines, I think you will still find this to be a worthwhile read.

Over the past few weeks, it has been painful to watch leaders and boots on the ground alike publicly eviscerating each other over philosophical differences in how we go about “change” and what exactly is progress in this work. And when I say work, I need to clarify that I do this on the side. There are many people and organizations who wake up and live this work every second of every day. They are to be recognized as this work is hard, it can be traumatic, and it breaks your heart every single day.

When the White House announced a focus on criminal justice reform many months ago, I tried to have an open mind. Trump’s son-in-law’s own father served time in federal prison and out of anyone in the inner circle he should understand some of the failings of our system (operating within the system as a poor and/or black person is not one of them, but he does have firsthand experience that cannot be dismissed).

In working with many others (including organizations I have supported over the years), an outcome of this focus was the First Step Act that passed the House this week with bipartisan support.

I have researched and listened and tried my best to evaluate this bill fairly without taking into consideration how I feel about this administration’s general motus operandi that they are above the law. The First Step Act will certainly bring some wins to this movement – mostly incremental in nature by progress no doubt. Some of them I would have given my right arm for if they had been passed while my mom was in prison (like more retroactive “good time” for those in the federal system). For currently incarcerated men and women and their families that is REAL and that is worth fighting for.

The competing argument, especially within the reform community, is that the bill doesn’t go far enough. Not even close. This “side” recognizes that we are not working with an administration or an attorney general that operates in good faith and that the sad reality is there very likely will be no “Second Step” to address the bigger issues that are completely missing in the First Step Act, like reforming mandatory sentencing laws that are responsible for filling our federal prisons (overwhelmingly with non-violent drug offenders). There are many other disturbing features of this bill that could play out disastrously as well.

There is A LOT more to this story, the bill itself and this principled disagreement between passionate people who care very much about real reform. But this is a blog not a policy document. It’s rare that I don’t take a position/stand on an issue I know something about and feel so passionately about. But, in all honesty, I see both sides of this one. What I do know is that the public and very personal in-fighting that has gone on in “the movement” is setting us up for failure long-term. Many people in this country have negative stereotypes of formerly incarcerated people and their allies. Our opposition will pounce on and use to their advantage the perception that we are unhinged, angry and divided. That will be an immeasurable loss no matter what how many more steps we are awarded (or fight like hell for) toward positive change and real reform for the 2.3 million people in prison in the United States.

With Gratitude and Hope for the Future,

Want to be notified when new articles are posted? Sign up below!